"Looking for something else great, to lift you up & make even more things happen? Look in the mirror! Believe in you!" - Sharron Melton 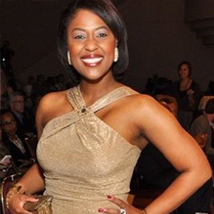 Sharron Melton is an Emmy nominated and Award Winning Journalist with years of Anchoring, Reporting, and Producing experience.  She is a former Morning Anchor for KTRK-TV in Houston, the Weekend Anchor/Reporter at WSVN-TV in Miami, Florida, the 5pm Anchor and Education Reporter at WPMI-TV in Mobile, Alabama. She was also an Anchor/Reporter/Producer at KOBR-TV in Roswell, New Mexico. She even worked as a radio reporter for the Agriculture Communications Network in Texas.

Sharron has been recognized numerous times for her broadcast work. She received the Outstanding Feature Story Award from the South Florida Black Journalists Association, Best Feature Reporting Award from the Press Club in Mobile, Alabama. She is also the recipient of the Alabama Education Media Award, and the New Mexico Broadcasters Association presented her with the Outstanding Newscast Award.

Sharron was named One of the 50 most influential Women in the City of Houston, by Houston Woman’s Magazine. She holds a Master’s degree in Television Communication from Eastern New Mexico University and a Bachelor’s degree in Speech Communication and Journalism from Texas A&M University, in College Station. Sharron has also taught at the University level. She worked as an undergraduate lecturer and instructor in broadcast news fundamentals at the University of South Alabama.

Sharron is on the Board of Directors for the Girl Scouts of San Jacinto Council and on the Steering Committee for Women of Wardrobe with Dress For Success Houston. She is also a member of the International Women’s Forum, National Association of Black Journalists,  and a former member of the Board of Directors of the Family Counseling Center of Mobile, Alabama. In her spare time, Sharron is heavily involved in volunteer service work .